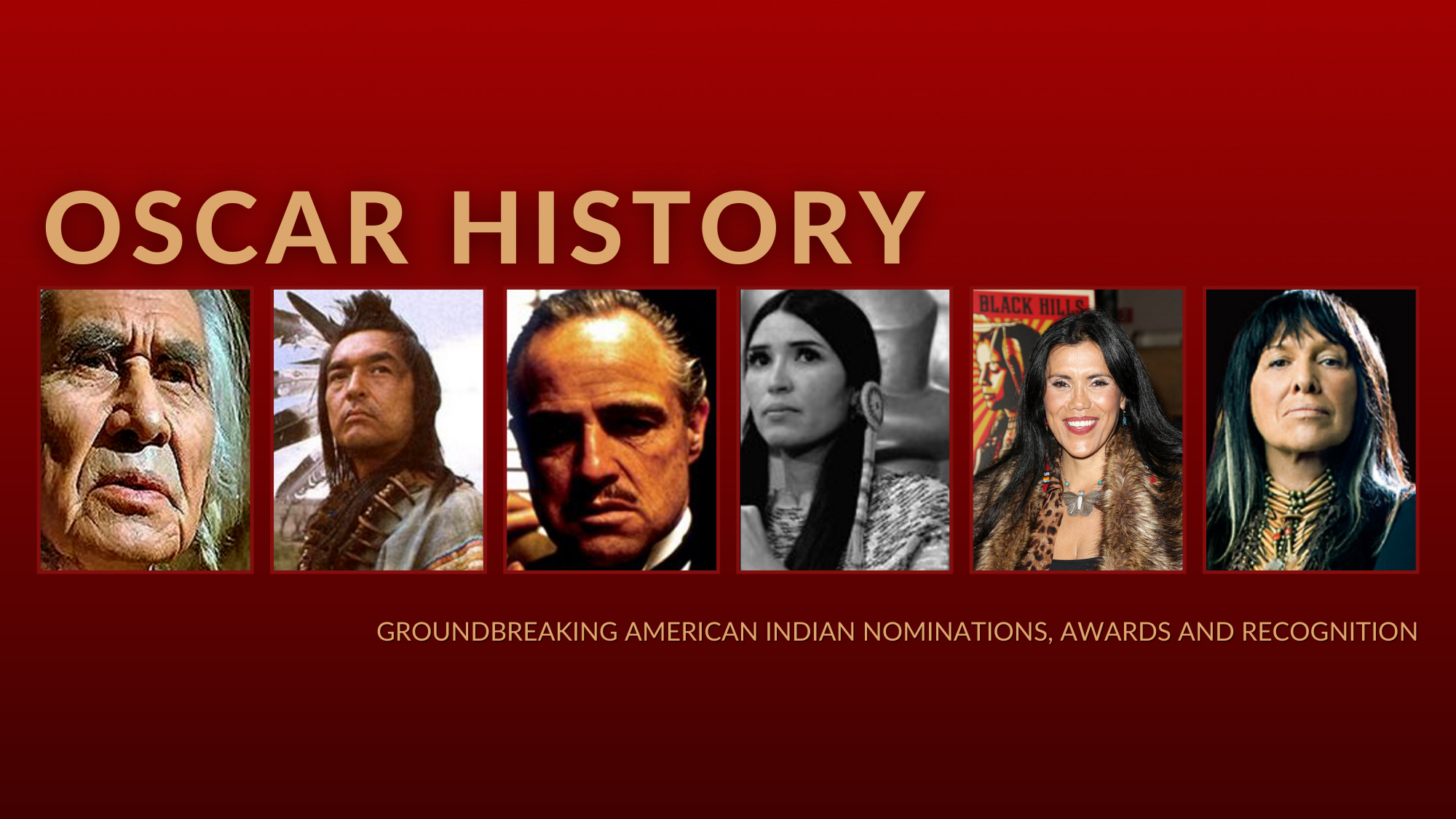 In respect to the The Academy Awards, Red Nation International Film Festival thought we’d share some facts of this ground-breaking history of American Indian Oscar Winners and Nominees.

1973, Marlon Brando took a stand for American Indian Image and the Industry’s treatment of American Indian in not accepting the Oscar for “Godfather’ instead sent Sacheen Littlefeather to speak on his behalf.

There have only been two Native ACTORS to be nominated for an Oscar;

Graham Greene for his roles in the 1991 Dance with Wolves

There has only been one Native MUSICIAN to *WIN* an Oscar;

1982, Buffy St Marie – Best Music, Original Song for An Officer and a Gentleman, For the song “Up Where We Belong”.

There has only been one Native FILMMAKER to be short-listed for an Oscar;

2000, Joanelle Romero’s (actor/director/producer/founder of Red Nation International Film Festival/Native Women in Film) documentary short, American Holocaust: When It’s All Over I’ll Still Be Indian, narrated by Edward Asner, makes the Academy’s Documentary shortlist in preliminary round. This documentary is the first and only film that compares Hitler’s attempted genocide of German Jews with the U.S. government’s treatment of American Indians and the lasting effects on the culture today.

Romero is the only Native filmmaker to date that was short-listed for an Academy Award in the Documentary Short Branch. Romero is the first Native filmmaker to receive in 2005 the Armin T. Wegner Humanitarian Award for “the vision to see the truth and the courage to speak it.” Romero in 2016 is a member of The Academy of Motion Picture Arts & Sciences, being the first Native woman to be invited.

Romero’s film was entered into the The Academy Awards for OSCAR consideration in 2000. 22 short films were entered that year, then Academy’s Documentary Short Branch determined the shortlist in a preliminary round of voting “9 were chosen for consideration” American Holocaust: When It’s All Over I’ll Still Be Indian was part of that 9 chosen. Then five were nominated. Before the film was removed from Youtube it had reached 3 million views. You can watch this award-winning film on Red Nation Television Network https://rednationtv.com/american-holocaust-when-its-all-over-ill-still-be-indian/

and its sister companion The American Holocaust Series https://rednationtv.com/american-holocaust-learning-companion/

*** These are federally recognized tribes that the actors, filmmaker and musician are from.

*** American Indian stories have proven to be bankable and marketable. Proving in Kevin Cosnter’s Dances with Wolves. Winning seven Oscars at the 63rd Academy Awards, including Best Picture and Best Director. The screenplay was adapted from the 1988 novel Dances with Wolves by the author, Michael Blake.
The Revenant is a 2015, directed by Alejandro G. Inarritu. The screenplay by Mark L. Smith and Iñárritu is based in part onMichael Punke’s 2002 novel of the same name, describingforntierman Hugh Glass’s experiences in 1823. The Revenant won three Golden Globe Awards, five BAFTA Awards and at the 88th Academy Awards, Iñárritu, DiCaprio and Emmanuel Lubezki won the awards for Best Director, Best Actor and Best Cinematography, respectively. DiCaprio also won the Golden Globe Award for Best Actor – Motion Picture Drama, Screen Actors Guild Award for Outstanding Performance by a Male Actor in a Leading Role, BAFTA Award for Best Actor in a Leading Role and Critics’ Choice Movie Award for Best Actor.

We acknowledge that our work takes place on Unceded and Occupied territories of the 575+ Native Nations. We are inviting you to take a moment to reflect on whose land you are living and working on and if you don’t know, to research and reflect.